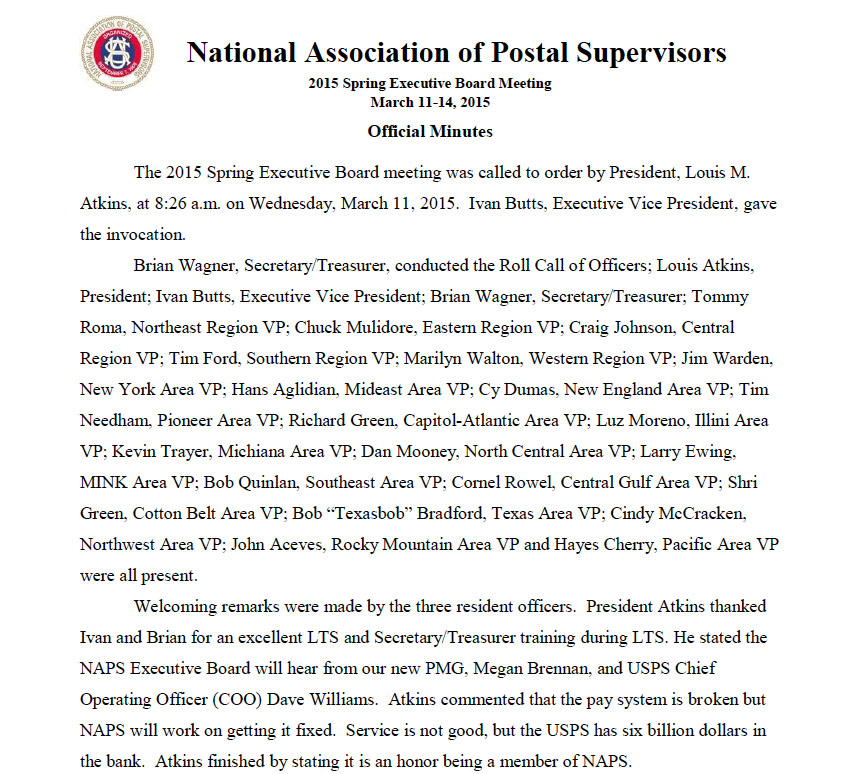 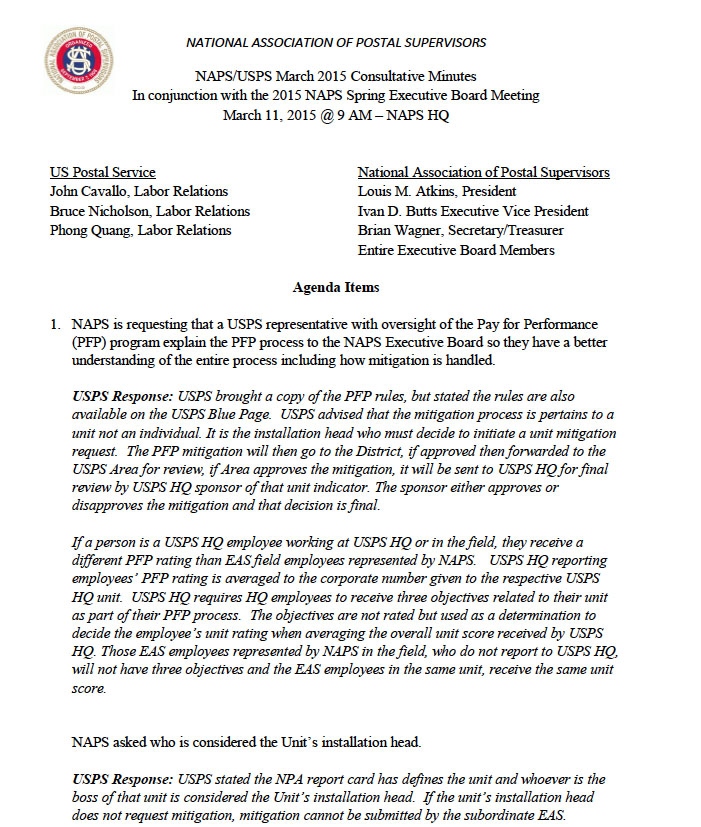 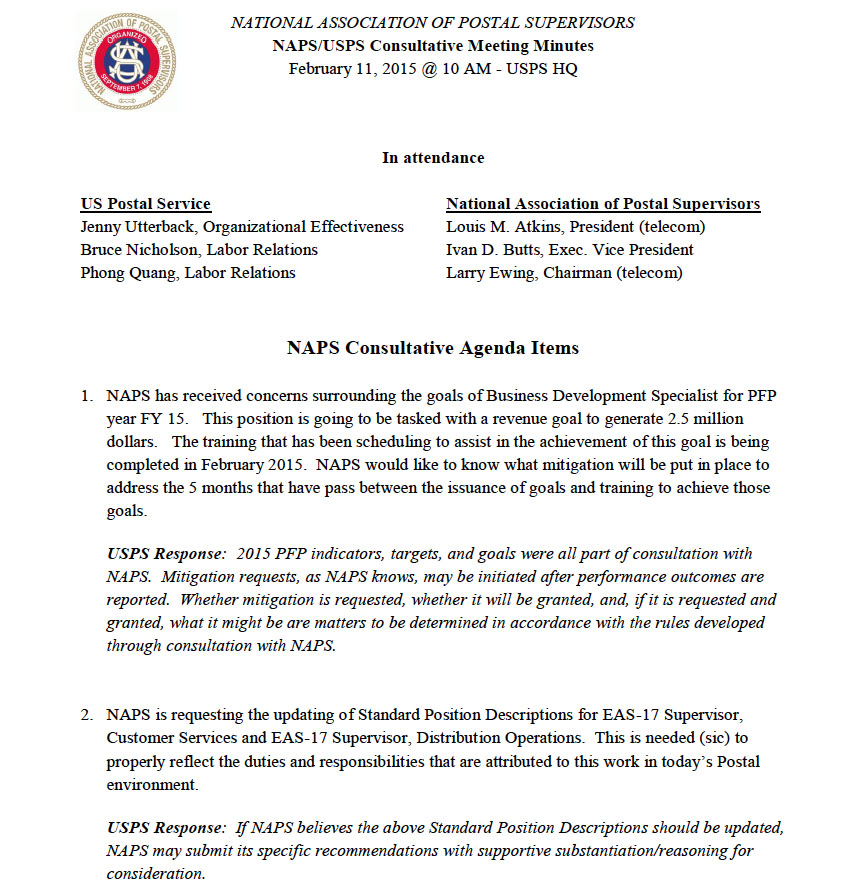 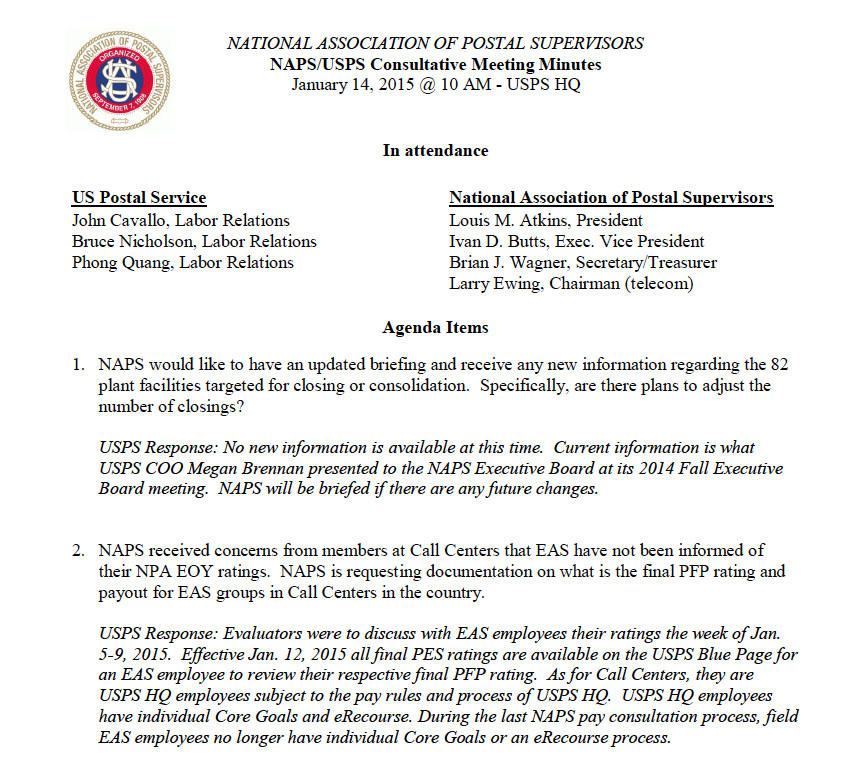 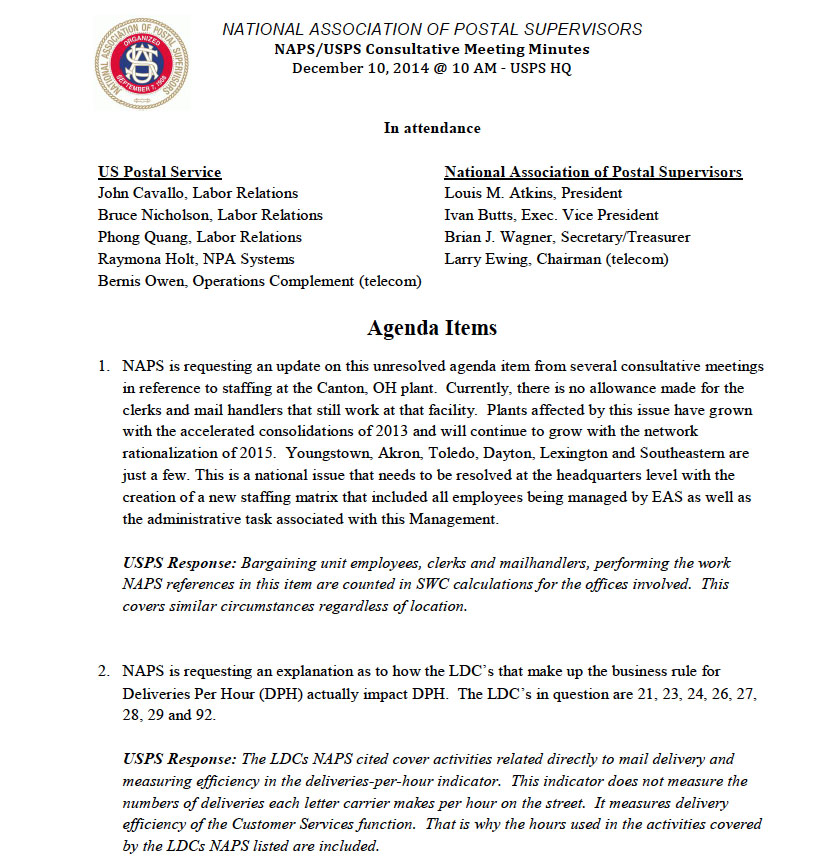 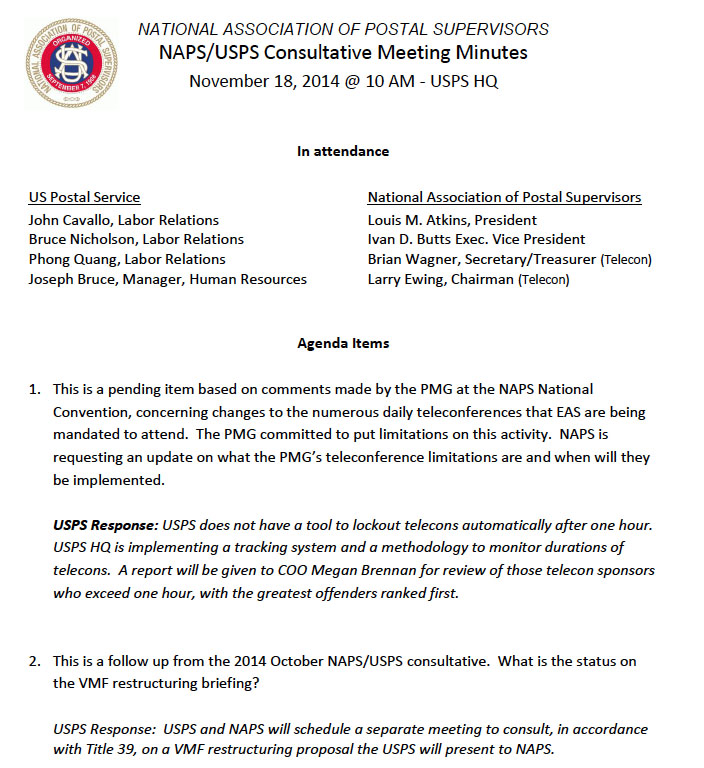 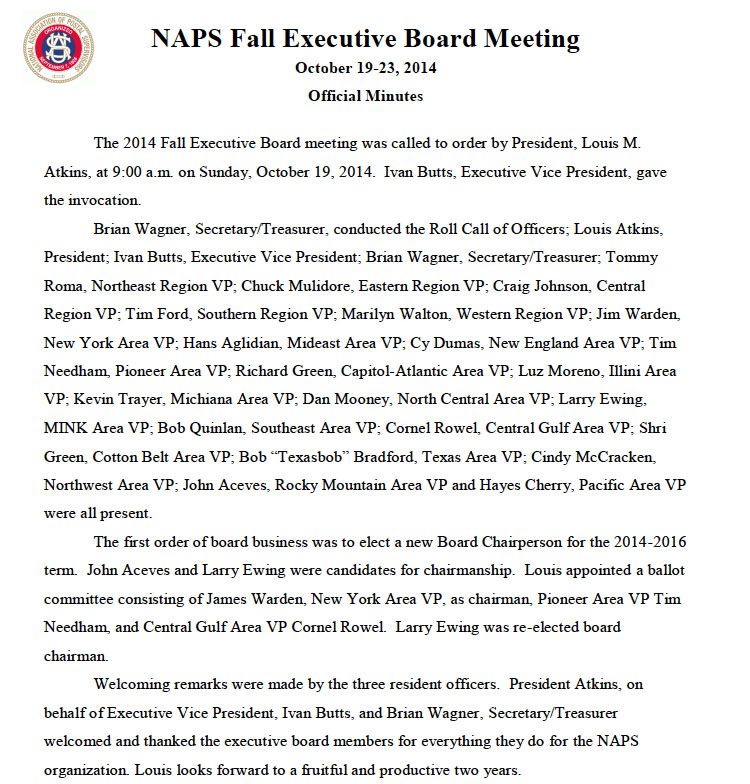 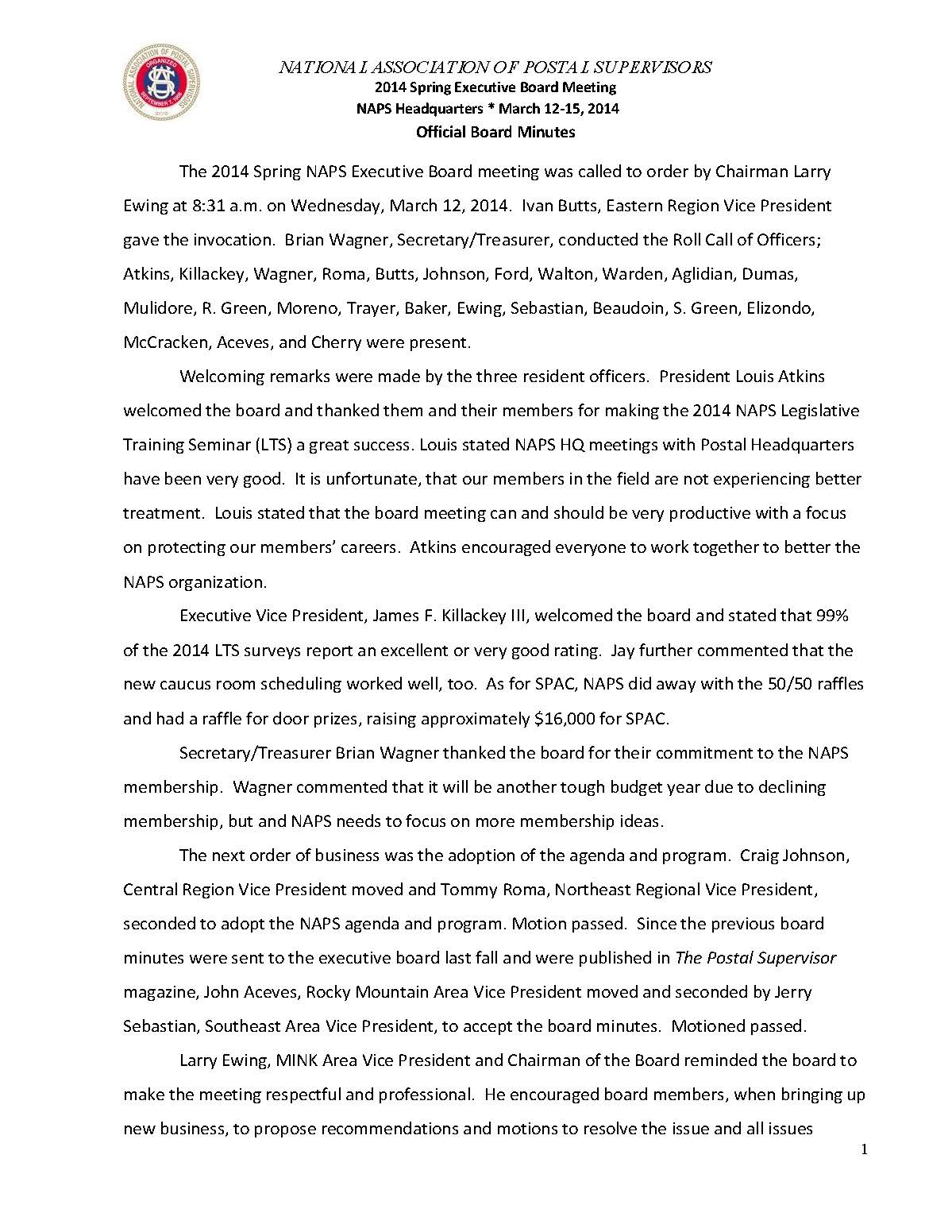 Senate lawmakers are preparing to mark-up postal reform legislation at a meeting of the Senate Committee on Homeland Security and Governmental Affairs this Wednesday, January 29, at 10 am ET. (You will be able watch the mark-up live here.)

The Committee will work from a new version of S. 1486, the Postal Reform Act, originally introduced by Sen. Tom Carper (D-DE) and Sen. Tom Coburn (R-OK) last year. Carper and Coburn are the top Democrat and Republican on the Senate Committee on Homeland Security and Governmental Affairs, which has jurisdiction over the Postal Service.

NAPS is closely reviewing the terms of the new version of the postal legislation, which Chairman Carper and Ranking Member Coburn released last week as a “discussion draft.” The two Senators are expected to file their new version later Monday, and amendments to the bill by several other committee members also are expected to be filed.

Late last year Chairman Carper cancelled three scheduled meetings of the committee to mark-up S. 1486, after sufficient support for the measure, as then written, failed to materialize. Some Democrats and Republicans were dissatisfied with various parts of the legislation, and NAPS raised a series of concerns, along with other postal employee groups. These developments triggered more recent negotiations between Carper and Coburn, resulting in the substitute version they will bring to the committee for approval on Wednesday. (A section-by-section review of the new Carper-Coburn substitute is here.)

Whether a sufficient majority of support for the new measure now exists remains unclear. Additional amendments at Wednesday’s mark-up are likely to be offered by several Senators, including Sen. Mark Pryor (D-AR), who wants to extend Merit Systems Protection Board appeal rights to all EAS employees, including 7500 postal employees who remain uncovered.

In summary, the new Carper-Coburn substitute would:

— Allow the Postal Service to renegotiate retirement benefits for newly hired employees, creating a two-teired retirement system, with lower benefits for new hires. (This is problematic in a number of ways, and NAPS and other employee groups are opposed to this approach.)

— Authorize the Postal Service to establish an exclusive health plan for all employees and retirees, integrated with Medicare coverage, to achieve cost-savings.

— Provide for a refund of overpaid CSRS and FERS monies under postal-specific actuarial assumptions.

— Establish a pre-funding arrangement for the Postal Service’s payment of its unfunded liability for future workers’ compensation payments, estimated at $17 billion. (NAPS is also taking a closer look at this provision, establishing a second, prefunding obligation for the Postal Service.)

— Require the Postal Service to maintain current delivery service standards for the next two years.

— Expand Postal Service authority to offer non-postal products in ways that allow it to better its financial position and capitalize on its own infrastructure.

— Reduce the current 11-member Postal Service Board of Governors to nine members and eliminate the Deputy Postmaster General from the Board; provide for the appointment of the Inspector General of the Postal Service by the President subject to Senate confirmation; and limit members of the Postal Regulatory Commission to two terms.

— Restructure government-wide the Federal Employee Compensation Act and reduce FECA benefits for totally disabled enrollees to 50 percent of the pre-disability wage upon attainment of full retirement age, along with other provisions, as included in postal reform legislation approved by the Senate in April, 2011.

— Provide for changes in federal real property asset management, as included in legislation previously approved by the Senate Committee on Homeland Security and Governmental Affairs in July, 2013

Postage rates on first-class letters and most other mail will rise by 3 cents today to help the Postal Service recover millions of dollars it lost during the economic recession, as a result of a decision of the Postal Regulatory Commission last month. That price jump represent a 4.3 percent increase, on top of the customary 1.7 percent adjustment for inflation.

In the meantime, the Postal Service, bulk mailing industry, and Senate lawmakers each would alter the PRC decision further. Both the mailers and the Postal Service went to federal court last week to contest different parts of the PRC decision. The mailers want to roll back any emergency price increase, while the Postal Service wants to make it permanent. (The Postal Service sought a middle ground and made the price increase temporary for two years, long enough to recoup the money lost during the recession.) Senators Tom Carper and Tom Coburn, in their new postal reform proposal, would also make the price increase permanent. Sen. Tammy Baldwin (D-WI), whose state is a major paper producer, is expected to introduce an amendment at Wednesday’s committee meeting that would strip the rate provision from the bill. NAPS supports rate flexibility along the lines proposed in the Carper-Coburn bill. 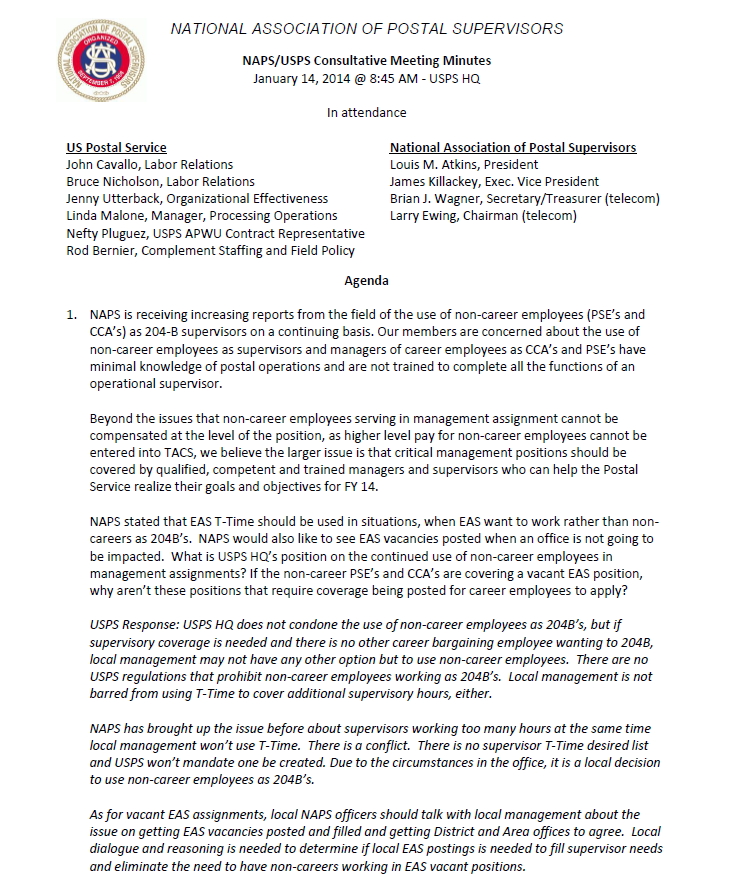