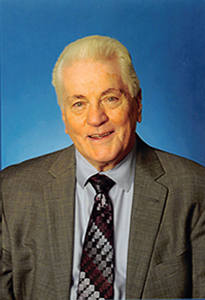 Tommy Roma entered the Postal Service March 1, 1968 as a substitute letter carrier in Brooklyn, NY. He was promoted to Supervisor of mails in 1978. He became a member of the National Association of Postal Supervisors from day one of his supervisory career and rose through the ranks of NAPS from Executive Board member to President of NAPS Branch 68 Brooklyn N.Y. He was elected New York Area Vice President of NAPS at the National Convention in Alaska September 2000, and has set out to make a difference.

After serving in various higher levels, he was promoted to Manager Ryder station EAS22, a position he retired from in 2014. Tommy had been employed with the Postal Service for 46 years. He is very active in the community and gave financial help to needy people who needed major surgery and could not afford it. He was also cited for his work with the Community boards, Mary Queen of Heaven baseball League, and the Bergen Beach Youth Council for his help with the youth of those organizations. He also has been recognized by local Politicians in the Ryder area for his help to the community over the years.

Tommy is married to his lovely wife, Cathy, who he says deserves lots of credit for standing by him and putting up with him for the last 47 years. They have a married daughter, Victoria, who resides in St. Petersburg Florida and is the proud parent of their first Grandson, Marco Thomas, who is now 10 years old; and, a son, John, who graduated Xaverian High School and entered the Postal Service as a letter carrier. He currently is the Manager of Maintenance, USPS, Triboro, following in his father’s footsteps. John married his lovely wife, Christina, 6 years ago and on July 9, 2020 blessed the family with the birth of their son, Thomas John Roma, who weighed in at 7 lbs and 20 inches tall. God bless them.