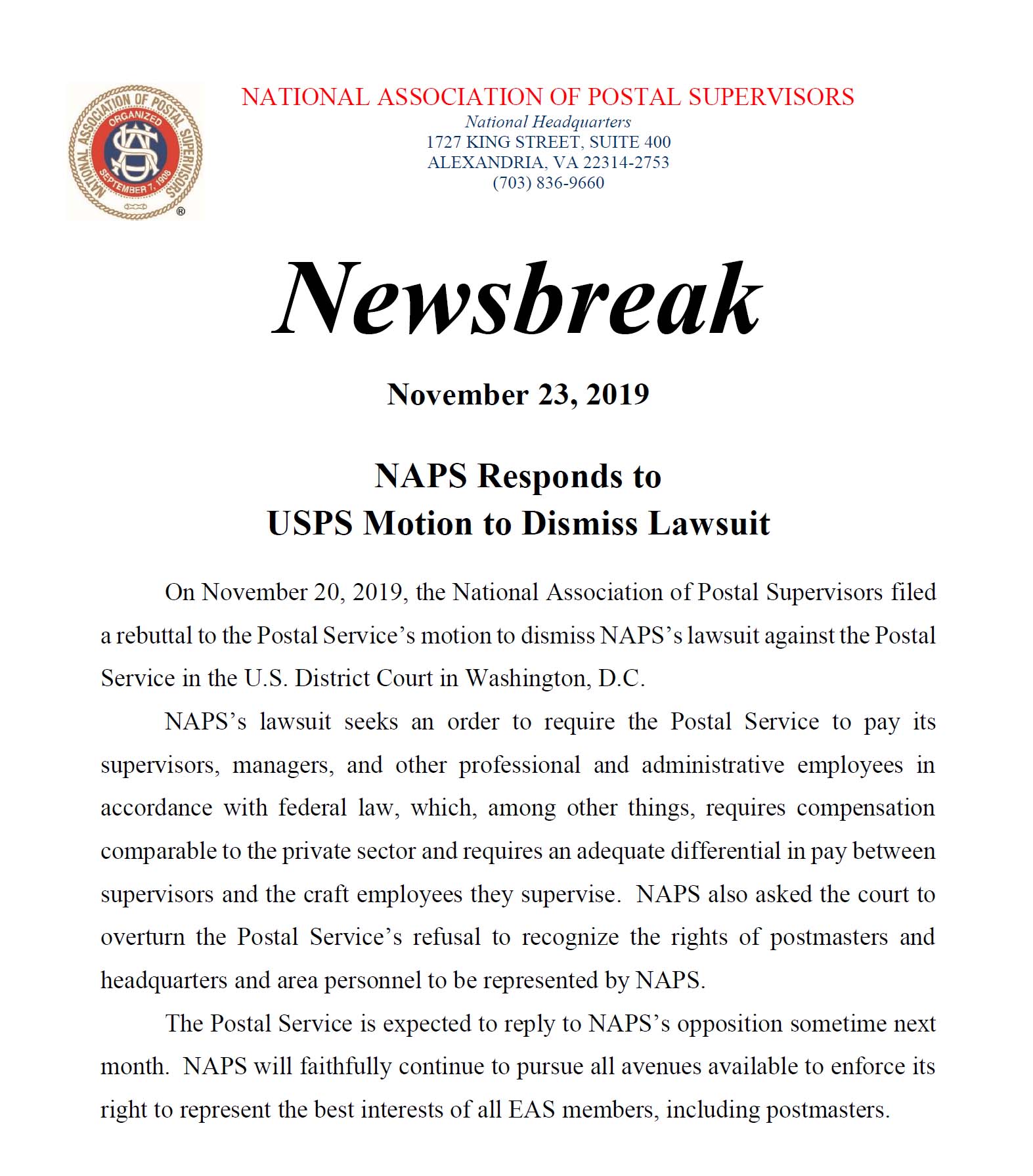 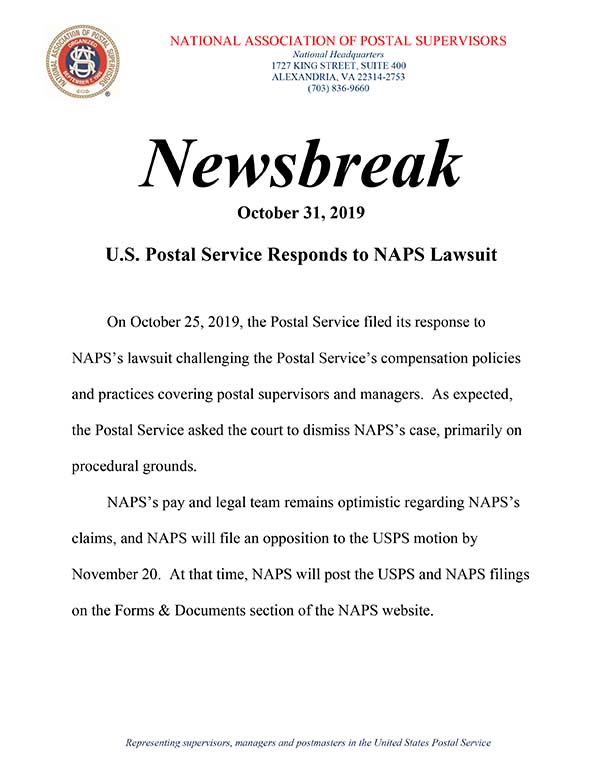 NAPS went to court because the Postal Service has violated the law’s requirement that it pay managers and supervisors a salary comparable to the pay of their private sector counterparts and that it pay them more than the workers they supervise. These managers and supervisors help to assure the prompt and efficient delivery of mail and the reliability of postal operations. Without a “supervisory differential” in pay, the incentive of craft workers to become supervisors is sorely undermined, and without compensation comparable to the private sector, the Postal Service cannot recruit well-qualified supervisors from outside the Service.

NAPS was prompted to file the lawsuit after the Postal Service in May 2019 issued the final terms of its 2016-2019 pay package for all personnel under the Executive and Administrative Schedule (EAS), which covers the nearly 50,000 managers, supervisors and other middle-management employees who are not members of collective bargaining units. The terms of the Postal Service’s pay package were largely the same as it had first proposed in 2017, before more than a year of “consultation” with NAPS’s leaders and before a review by a three-member fact-finding panel convened in 2018 at NAPS’s request by the Federal Mediation and Conciliation Service. The fact-finding panel extensively reviewed the fairness of the Postal Service’s pay system for its managers and supervisors and unanimously found that the so-called “pay-for-performance” system the Postal Service had devised and applied to all postal managers and supervisors is “seriously flawed.”

Instead of accepting the panel’s recommendations, the Postal Service rejected nearly all of them, resulting in NAPS’s executive board voting unanimously to file a lawsuit contesting the Postal Service’s EAS pay policies and practices. In the lawsuit, filed in federal district court in Washington, NAPS also seeks a court ruling directing the Postal Service to recognize NAPS as a rightful representative of postmasters and EAS Headquarters and Area personnel. Unfortunately, the USPS denial of NAPS’s right to represent all EAS and postmasters is part of a continued effort by USPS executives to “divide and conquer” the EAS mid-level management ranks.

In its April 2019 factfinding report, the federal mediation panel unanimously concurred with NAPS on nearly all matters, strongly validating NAPS’s complaints about Postal Service EAS pay policies. The panel found that the Postal Service’s [pay for performance] system is “seriously flawed in that it does not accomplish its objectives or comport with the requirements of the [Postal Reorganization Act].” It also found that the Postal Service does not properly calculate the supervisory pay differential, which “has resulted in many thousands of Field EAS managers and supervisors receiving less than the Service’s own 5% target differential.” And it found that “the [pay for performance] program negatively impacts the Service’s ability to attract and retain qualified and capable supervisory and managerial personnel and fails to promote the maintenance of a well-motivated workforce.”

Experts in human resources continually stress the importance of worker engagement. Engaged workers create a positive impact on the bottom line of the enterprise, improving customer service, reducing absenteeism, and lowering accidents. The Postal Service has declined to put those principles into action, or even to become alarmed that its own Pulse Survey of the USPS workforce, conducted by Gallup, placed its employees in the bottom percentile of engaged workers in the nation. The Postal Service has taken no meaningful action despite the Gallup survey finding for the past several years that 99% of other large American companies have better employee engagement.

Postal managers and supervisors have grown increasingly frustrated over their pay and the lack of respect given by USPS executives to their role within the organization. At NAPS’s biennial national convention in August 2018, delegate frustration boiled over about the EAS PFP system that has produced years of paltry annual pay increases, including no pay raises for any EAS personnel in 2011 and 2012 and no pay raises for thousands of EAS personnel in 2015, 2017, and 2018. In contrast, all union-covered postal workers receive annual cost-of-living pay adjustments under agreements negotiated with the Postal Service. Further, unlike the rest of the agencies in the federal government, the USPS does not provide area wages or locality pay adjustments to workers in higher-cost areas, such as San Francisco, New York or Washington, D.C.

Now, a federal court will decide whether the panel was correct in finding that the Postal Service has violated—and continues to violate—the law’s requirements.

Brian J. Wagner is national president of the National Association of Postal Supervisors.

Held at the Fairfield Inn & Suites in Uncasville CT. on Thursday 8/1/19

The Capital Metro Area had chosen Fairfax for the pilot site. After all data was finalized, Fairfax did not earn an additional supervisor. It was discussed to choose Chantilly as this Office has numerous rural routes, expanded tour of operation and qualifies for an additional supervisor. Mr. Tulino will ask for this site to be approved. Once approved the date will be determined for the pilot study.

An issue was discussed involving the tour of operation. Some Offices are open for operation 20 hours daily. Though larger Offices utilize a supervisor on tour 1 many utilize a clerk in charge as the staffing is minimal. Rather then hold up the pilot study to determine the work load credit for the extended hours of operation it was discussed to look at this work load in the pilot offices it pertains to during the study. The pilot will also include offices with rural routes and studies will be conducted during the pilot of similarities/differences with supervisory workload with those city and rural routes.

A review of the new SWCs program was discussed.

The program shows just over 3,000 supervisors are needed. The program had been updated using the authorized number of supervisors when prior the program was using data from Webcoins. Webcoins did not show the vacancies as authorized positions. This was the reason why the number needed in the new program to establish was higher prior.

It was also discussed the amount of supervisors now authorized in level 18 Offices. The number is approximately 1,300. The concern with this is the 15 hours of clerk (APWU) work that is authorized to be performed weekly. The program authorizes the first supervisor at 12.5 hours of supervisory work. There are approximately 156 level 18 offices that qualify and currently have a supervisor based on the current SWCS program. The program has been modified to only show the Level 20 and higher post offices. Level 18 offices will be analyzed separately.

By not including the level 18 offices in the program this would reduce the number of supervisor to increase to 1,779.8.

The reason the new SWCs number shows a .8 supervisors is the program has been adjusted and an Office showing a work load of 12.5 hours to 20 hours will be given a supervisor with a Non-Traditional Schedule allowing that supervisor to work in multiple offices. The bid will specify the specific work hours and offices with specific rest days. 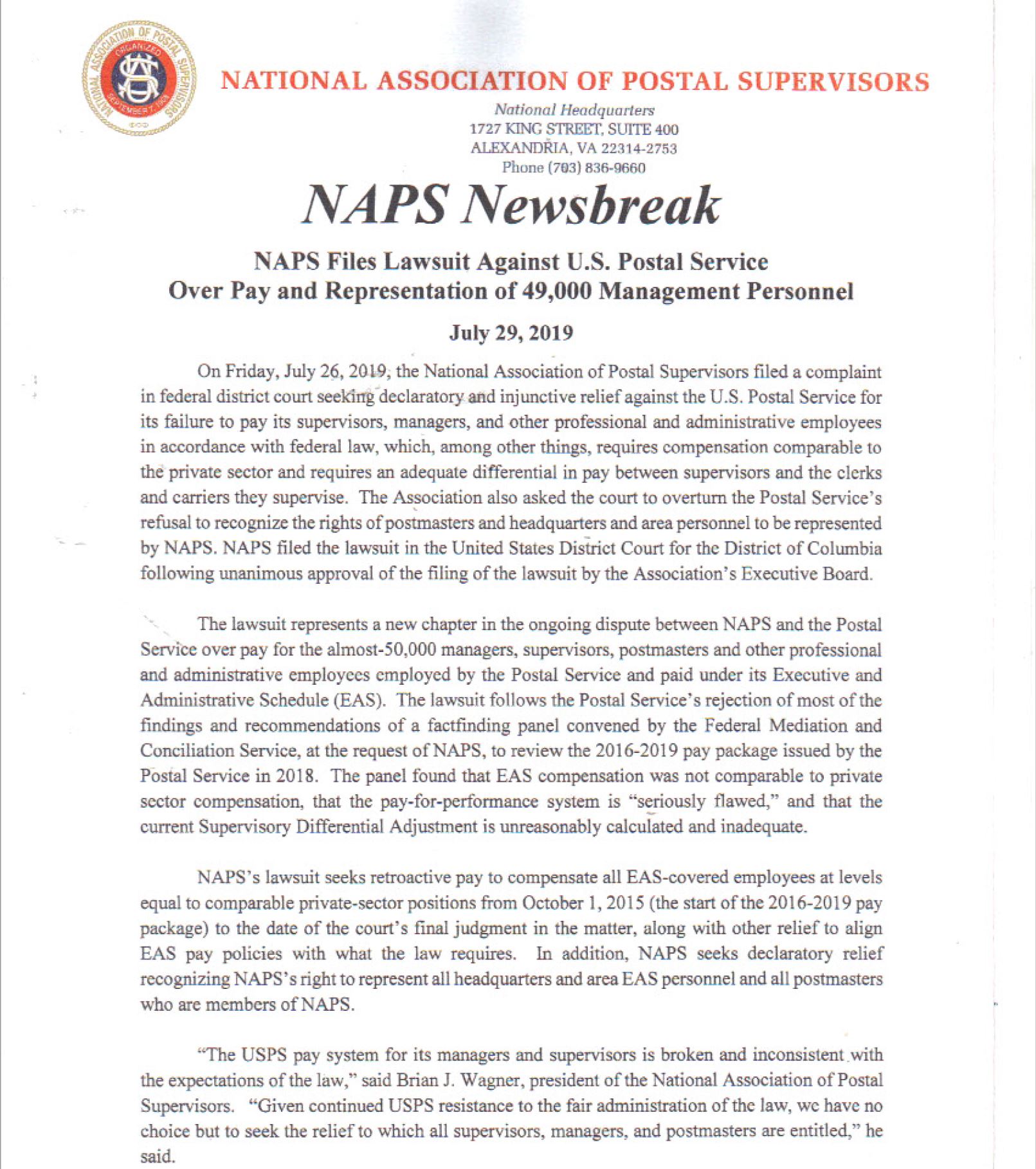 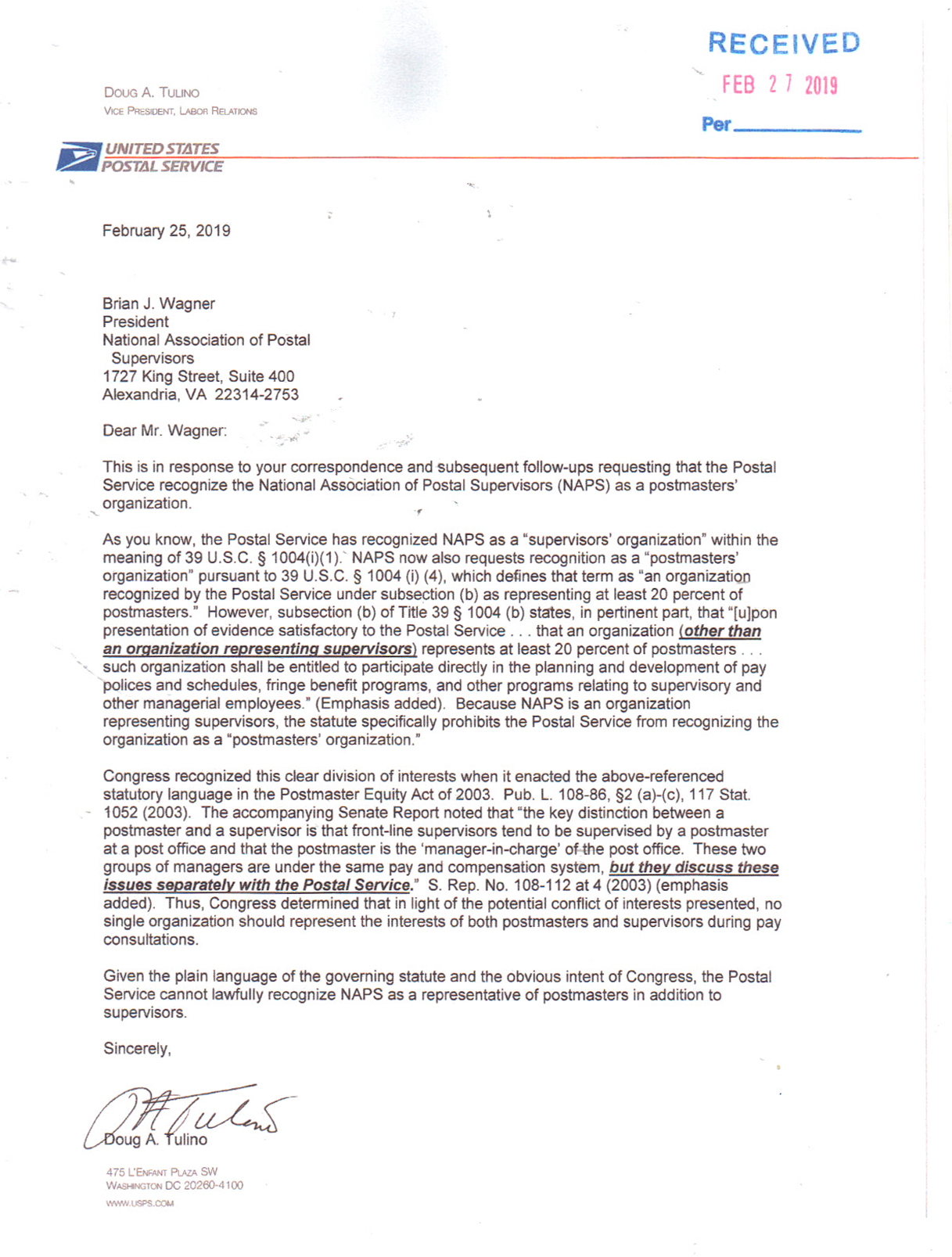 The 69-page document recommends a reformed USPS business model, with more cost efficiencies and a reduced universal service obligation, and added reliance on private competitors to meet the nation’s communication and commerce needs. The report favors the retention of the comprehensive USPS delivery network, but would loosen the delivery and mailbox monopolies and provide greater advantage to the Postal Service’s competitors.

The Good
The Task Force recognized the reliance that rural America and outlying communities have on the U.S. Postal Service and the necessity of preservation of the comprehensive postal network without undermining its use to rural residents and businesses. The report also notes the 7 current vacancies on the Postal Board of Governors to exercise the Board’s important strategic planning and governance responsibilities. Also, the Task Force suggested that the Postal Service explore and implement new products and services that generate revenue, and co-locate complementary retail establishments within existing postal facilities. Finally, the Task Force suggested that the Postal Service’s retiree health liability be re-amortized and re-calculated using actuarial data limited to current retirees and employees near retirement, rather than all postal employees and retirees.

The Bad
There are also recommendations that are problematic. The Task Force urged the Postal Service to expand contracting-out postal operations, including retail service, mail acceptance and mail processing. And it recommended the pricing of competitive products, such as small parcels, bear a significantly larger portion of the Postal Service’s overhead costs, a view consistent with United Parcel Service’s agenda and the President’s view regarding Amazon. This recommendation sets the stage for a full frontal pricing assault on package shippers through pricing that captures the greater costs associated with financing of the Postal Service’s “Universal Service Obligation” (USO), capital expenditures and long-term liabilities. This new burden would result in escalating prices for parcels and items originating or delivered to rural and outlying areas. Also, the Task Force would restrict the scope of the USO to those postal products and services deemed to be “essential” versus types of mail and packages deemed “commercial” and without government protection.

The Ugly
Finally, there are recommendations that upend the Postal Service’s historic role as a government-reliant contributor to commerce and communication throughout the nation. The Task Force recommendation that delivery mail boxes be opened up to private-sector competitors through licensing agreements raises a host of policy, privacy and operational concerns, as does the conversion of more post offices into privatized contract units. The Task Force’s recommendation that the USO be narrowed and defined by the content of the mailed item and that access to a government-operated postal retail facility be limited raises concerns about the affordability and accessibility of the nation’s postal system. The Task Force’s recommendation that postal services be reduced, along with delivery days, disregards steadfast directives of Congress for decades. Similarly, the changes recommended by the Task Force in the Federal Retirement System, in which USPS employees participate, to increase employee contributions and to convert, where possible, to a defined contribution system would generate strong resistance in Congress.

NAPS will be working with Congress and postal policy-makers to help implement the good, but reject the bad and the ugly. 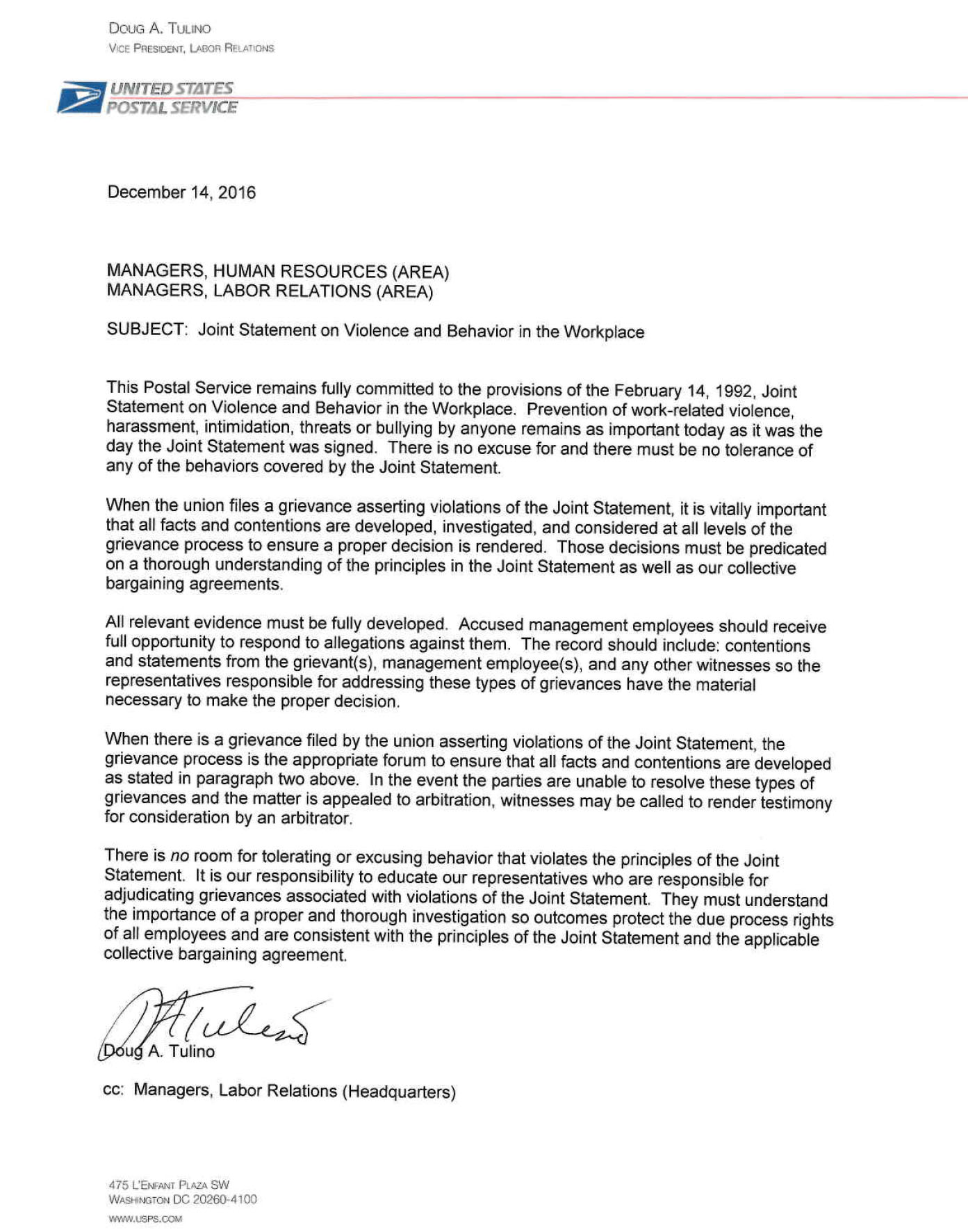 The Executive Board at its recent Fall meeting voted to sunset the NAPS Forum on the NAPS website for the reasons outlined below. Because the Fall Board meeting minutes will not be published until the January 2017 issue of The Postal Supervisor, please forward this Board Memo to your members to provide notice of the Forum’s closure, effective November 1.

The Board voted to sunset the Forum for several reasons:

To protect the NAPS organization and its members from liability related to inappropriate and slanderous posts on the Forum.

Numerous Forum topics/posts did little to advance or promote the welfare of the NAPS organization; some, in fact, contributed to misunderstanding or represented bullying towards other members.

The NAPS constitution and bylaws envision the resolution of member questions, issues and concerns through their respective branch, state, Area and Regional officers, rather than a public forum.

Effective November 7, NAPS established a new Bulletin Board on the NAPS website for sharing information. Members may go to www.naps.org and, under the Members Section, click on the Bulletin Board link where they will find NAPS HQ correspondence and mail received, board memos, NAPS/USPS consultative minutes and other information.

In addition, NAPS members are encouraged to send questions, concerns and issues to NAPS HQ at napshq@naps.org to be addressed or forwarded to the member’s respective NAPS Regional or Area VP.

Thank you for sharing this Board Memo.